Get To Know Who's Behind Junyuan Bags Meet The People Behind Junyuan Bags

Junyuan Bags
was founded in January of 2014 but the idea and work came way before then! The owners, Jenny and Cole are a husband and wife team who never thought Junyuan Bags
would be where it is today.
Jenny first learned to sew when she was 5 years old. At that young age she was sewing clothes for herself, her dolls and even her family dog! When Cole was young he would dig trenches, or clean up dry wall at constructions sites and even go around and wash windows all to earn money. All of his hard work fueled his desire to own his own business one day. Fast forward many years when Cole and Jenny were out with some friends one night brainstorming ideas of something Jenny could start sewing to make some money on the side while she and Cole were in school and working full time. The idea for making a different kind of diaper bag was thought of, and a light bulb went off in both of their heads.

Jenny and Cole spent many months coming up with a design and pattern for their diaper bag. Once they finally nailed it out, Jenny brought their first Junyuan Bags
bag to life. And they sold that bag to their friend who helped them come up with the idea. That first year in business Jenny handmade each Junyuan Bags
bag. She made just under a 100 bags that year. All while working a full time job and being pregnant with their first child. From the start they knew they were onto something because they couldn’t keep up with the people wanting a bag! They would get emails from people asking if they could pay for a bag and wait 6 months, just so they could make sure they got one! Cole knew that they needed to start getting their bags manufactured in order to fulfill their demand! At this time, Cole was finishing his business degree and Jenny was working full time from home while she was dealing with a really tough pregnancy all while living in Jenny’s parents basement, trying to save money before their baby was born (if you’d like to hear more about Jenny’s pregnancy you can listen to this podcast she was a guest on talking about her pregnancy). So money was not there, and manufacturing is really expensive! They decided they would try a crowd funding campaign through Kickstarter. Their Kickstart was a huge success (you can see their Kickstarter page here) thanks to so many supporters, friends, family and social media influencers. They raised $42,000 in just 15 days! They almost doubled their asking goal of $25,000. Not only did they have the funds to start the manufacturing process but they also validated that their was a need and a want for their product that they had spent so much time on. Several months later their Kickstarter was featured in The New York Times (you can read that article here).
From there they were able to start having their bags manufactured and were able to list bags on their website once they arrived… 4 months later! They will always be the first to tell you manufacturing is not a quick process! 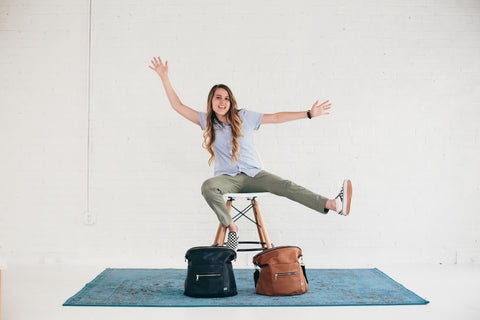 Their second year of business came with a new set of problems (but quality problems is what Jenny and Cole like to call them). Junyuan Bags
would get a shipment in of bags in, list them online that day and sell everything they had in a matter of hours! This happened all year! And they still struggle to keep up with their demand!
Jenny and Cole both run Junyuan Bags
full time. And by full time we mean 24 hours a day 7 days a week! Their work is never done and they never stop. All while their nearly 1 year old is in tow! They currently use a fulfillment center that packs and ships all the orders that come in. They used to pack hundreds of orders a day out of their house, so they are very thankful to turn that task over to the professionals! They also have an employee who helps with emails and social media, other than that they do it all! They plan to hire more people on the future to help as their company continues to grow.
Jenny and Cole want each and every customer to know that when they order a Junyuan Bags
bag they are supporting them and their daughter. They aren’t a huge corporation, they are it! They appreciate each and every customer they have! Their customers are the ones who put bread on their table and a roof over their head. They’re grateful for the patience everyone has had with them while their business grows and for understanding when problems or issues arise! They take every issue seriously and their customers can tell. If you ask around anyone will say their customer service is top notch, this is because they care so much.

Their goals for the future ahead is to introduce new products (they have two in the works now) and continually add new colors of Junyuan Bags
bags (also they have two new colors being worked on now). They also will be opening their doors to retailers soon! Making their bags more accessible to people all over the world. They hope to help other entrepreneurs get started to give back to everyone behind the scenes who have helped them during this process.

Written by a close family friend.

Send Us A Message